◄ Back
Next ►
Picture 1 of 1
Now below, we have removed the forecast lien and added specific entry points against the trend, polarity line entries, Law of Vibration extreme price projection entries, and money management on entries are added to the actual chart of the SP 500, so you can compare and see how we did. 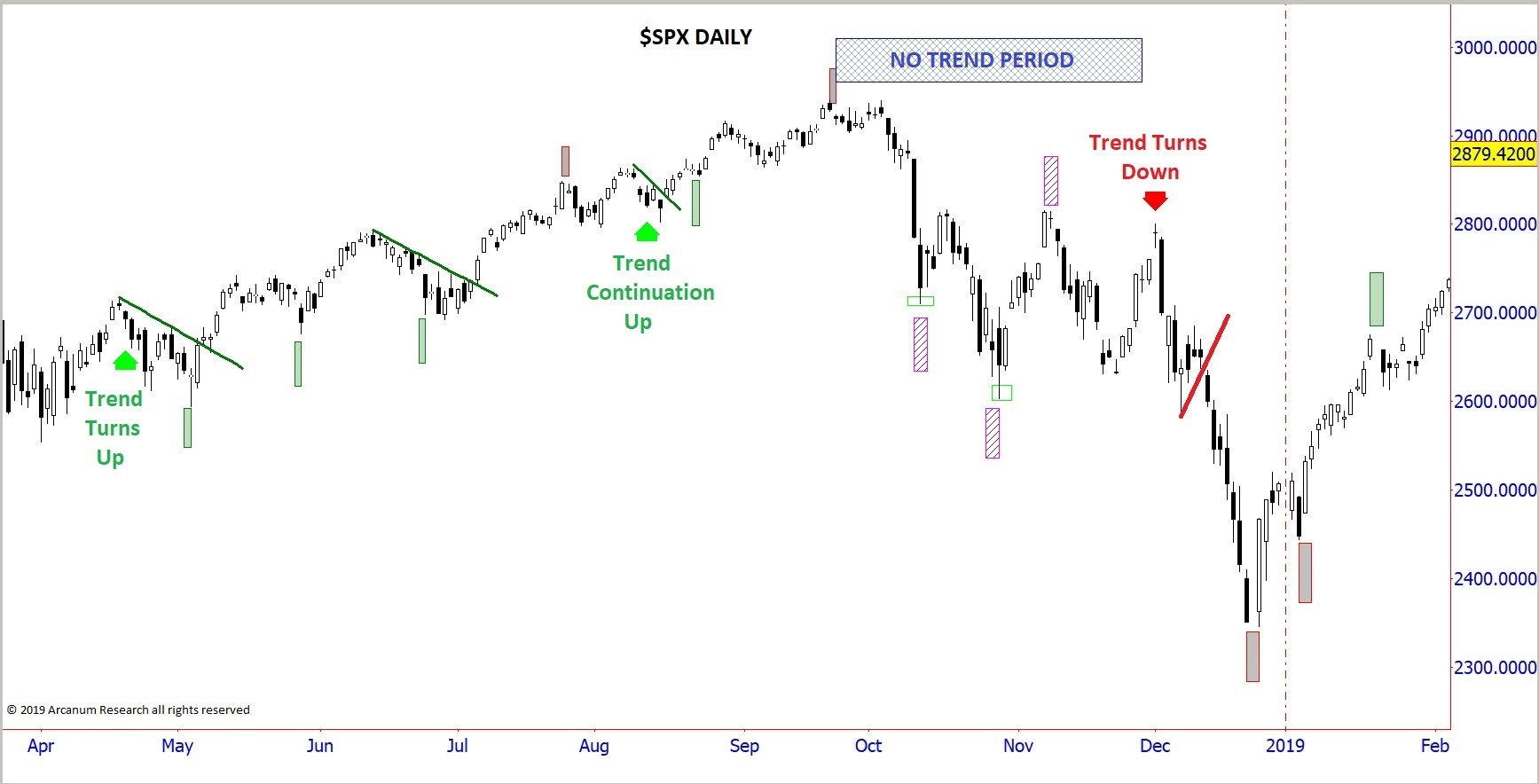 ◄ Back
Next ►
Picture 1 of 1
The green forecast line in the chart line was drawn and published before March 21st of 2018. Once the forecast is made, it we never change it. Green and red arrows show when the Arcana trend forecast turned up or down. These points can be forecast years in advance, and are also published well before March 2st, 2018. The forecast curve and general direction looked pretty accurate for 2018. The Arcana trend directions and durations were very accurate. We find this consistency year after year. See the “no trend” void area September 23rd through December 2nd when the market went crazy. This area is why Gann said so many market tops happen in August.

We think the bizarre drops of 2015 and 2018 where the market moved against the predicted trend were a ploys by big money to send our FED a message. – Raise rates, and here is what will happen to you. It seems that the FED listened both times. In both years the market then corrected to follow the predicted forecast.

Included are the “Minor Arcana” turn times, which are entry points on moves against the trend (light green pillars.) The red and gray pillars are Minor Arcana ends of runs, for taking positions off. The light green boxes (two of them) in crazy October mark the extreme price buy entries projected by Gann’s Law of Vibration.

There were 4 trades and 1 short entry signal in December we never took. This was due to the excessive volatility. In the first trade, “A” in April, the Arcana trend forecast turns up in conjunction with the forecast curve. One could have aggressively entered on the green pillar or conservatively waited for the price to break above the green downtrend line. In trade “B,” the same choice presented between aggressive Minor Arcana entry and trend-line break.

Then on September 23rd the trend runs out. After two great trades, we advise “out all positions” during trend voids. “Red Alert” get out at October 3rd with a red and gray top of run turn time and our “Top & Bottom Finder” signaling a definite top.

In the trend gap between September 23rd and December 2nd, we will look for polarity line breakouts or breakdowns to enter on. The polarity lines actually gave a “too volatile” signal during this entire time. But on the 11th of October we had a Law of Vibration price projection and “extreme buy price” in the first light green box at 2712. This was our 3rd trade long with a 100+ point gain. Then another extreme price was hit at 2612. This was our 4th trade. Again another 100+ point bounce.

Finally, the forecasted December 2nd Arcana down-turn was dead on. The market took off south, paused and pulled back, then resumed down. Entry was signaled on a simple trend-line break by the red trend-line broken. Even though this would have been a killer trade, we advised against it because of excessive volatility. After 4 great trades and 400+ points if these signals were followed, why risk? After all, prices were still above an up-sloping 50-month moving average.

For pricing, email us at empire@tradingwdgann.com or call 312-532-2116 to signal your interest the Empire newsletter. Previous editions are available to accredited investors or those who have taken our our “W. D. Gann: Magic In The Markets” Course.