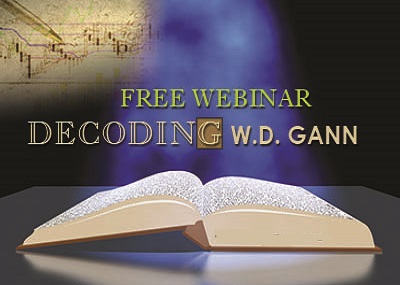 WEDNESDAY JANUARY 22nd, 2020, 3pm CST. This webinar will once and for all dispel any assumptions that Gann’s writings were just ONLY plain, literal market advice. In fact, the genius of how Gann wrote was that he elaborately veiled his true trading methods into prose that doubled as sound market advice.

Gann’s public writings were also designed to be reminders and summaries for students who had previously received Gann’s true methods through oral teaching. This webinar will take you through the entire process of how we blend the science of literary exegesis with market back-testing that proves Gann’s real methods. Included will be an outline of the true subject matter of each of W. D. Gann’s volumes, keys to unlocking various types of ‘coding,’ and never-before-seen examples of decoded methods applied to recent, real market conditions.

This webinar is not recorded and was only broadcast live on January 22nd, 2020.

“Decoding Gann” is particularly fitting for long time Gann aficionados who’ve previously tried to lift the veil on Gann’s teaching themselves. We will also follow, in detail, the trail Gann points to where he directs readers to the finer points of his methods that were chronicled by Theosophical writers of his time. These were books on his infamous “reading list.”

Registering for this webinar is free! “Decoding W. D. Gann” will NOT be recorded, and will only be broadcast live at 3pm CST on Wednesday, January 22nd, 2020.

On their surface, each of Gann’s writings convey great market and trading advice. Gann’s writings were the source of popular market jargon used today, such as stop-loss, pyramiding, multi-time frames. Linking all these techniques at face value, you will get a decent trading system, but not anything secret that would net you $50 million in 1920s money. But underneath the public face of Gann’s pen does indeed lie a valuable secret which he considered more valuable to his readers than his trading system. For the first time ever D’mitri will be offering profound clues of how to read for this “secret” as well as some of Gann’s source material in which it can be found.

For more on the unpublished trading methods of W. D. Gann, see our “W. D. Gann: Magic In The Markets” Course on our new website.